For those who don’t know about the 30-days Startup Challenge, please have a look at my explanation here. The post of today will explain in detail how I selected the name of the startup, and what had been achieved in the last 4 days. We are indeed already reaching day-4 and I have the feeling that many things happened.

You have been almost 300 people to read the first article (and I got no comment via the blog). I exchanged many emails since last Monday, and I should say that the overall feedback is really positive and motivating for me. Thanks to the first article, 10 more people signed up to the newsletter, which is quite a good number. If you want to receive the last updates, I strongly suggest you to do the same :

Now let’s go into the important matter : How I discovered the name of my startup. You will learn a marketing technique called A/B testing.

Step 1: Finding a name for the startup

The first move one should make to find a name is a brainstorming. To do that, I recommend you to read the complete article from Cezary Pietrzak on Mashable : 16 Tips for Picking the Perfect Startup Name. I followed his methodology more or less.

That’s a long list, but it’s just the start. You can’t really name your startup with one of those. So the last step was to make either a combination of these words, or to make them sound similar to the concepts. Here is a shortlist of the different ideas that I wrote down at this point : wordio, voicedesk, best voice, voiceo, voicity, authority, bestsay, sayit, wordeero, kiwordz, voiceero, best voice, bevoice.

Okay, that’s quite a long list. How was I able to select only three or four candidates out of that? I used my friends/colleagues and social networkers. I created a google form to ask them exactly this : “Which is the best name in this list to describe the value I want to bring to people, say (promoting copywriters skills and help webmasters/seo agency to hire them)” ?

I left the question opened overnight. In addition to the result depicted below, I got some suggestions from people. One had been added to the list : scribens . Hat tip to Pepe Arromazam for the smart suggestion. Below is the graphical result of these votes : 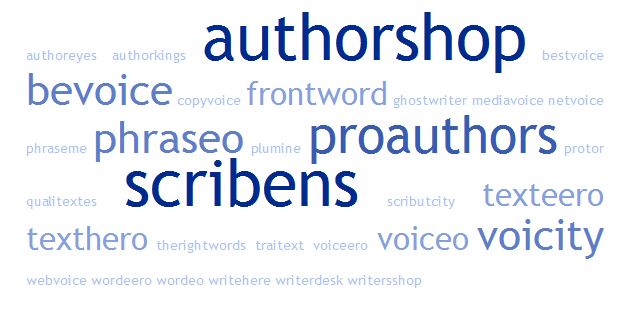 Trick : in the google form, add an “email” field to collect your initial list of email addresses. These initial people have seen the first step of your business, they might be really valuable latter.

Picking the right one – A/B testing

Out of the big names above, I did not like Proauthors at all, so I removed it from the list I was going to test. I preferred Phraseo instead, but I guess that in English it sounds worst than in French. I had a last-minute intuition and added WordiZ to the 3 winners :

I found this last step of AB-testing your names very smart. I used the idea from Will Mitchell from StartupBros. The whole point is that the best choice is the one that would do your clients. So why not let the crowd deciding?

I used the service unbounce.com to create four identical landing pages where only the name/logo were changing. Their UI is pretty simple, and I just had to create four logos with Inkscape. Then using Unbounce, I designed a standard and simple landing page for each name. Every time I was changing the logo and that’s it. Here is an example of the landing page I created (you can click to zoom it) : 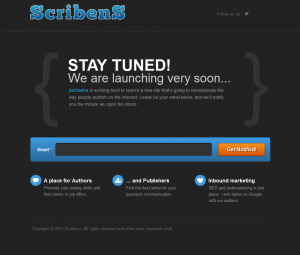 The service is really nice because you can then follow which page received the highest conversion rate. It also saves the email addresses so that you can use the database afterward. Also, Oli Gardner the co-founder and creative director is really nice and can sometime answer your questions if you have some.

Bring some traffic to your landing page

That part has been the worst experience of these 4 days. According to Will Mitchell, bringing traffic with Facebook was easy … No it wasn’t !! First, you have to place some ads on Facebook ads page. Once it’s done, the ads have to be accepted : for me it took three days ! Really longer than what I expected.

Another negative feeling I had was related to the new kind of ads : the “newsfeed ads” that appear in between your friends posts. I personally find it too intrusive, but the problem is not even there. If you buy this kind of ads, then Facebook will make you pay for any click on the advertisement. And, as Facebook requires this kind of ad to be linked to a Facebook Page, I lost almost 50 clicks because their were sent to my Facebook page and not to the actual landing page. So follow my advice, avoid Facebook ads (at least the newsfeed ads).

Alternatives remain however. The cheapest is to take part in discussions on social networks like Google+ Communities, Twitter, LinkedIn Groups or some web forums. That’s the one I chose and the ROI is amazingly higher than Facebook. Otherwise, you can also buy some Google adword ads.

So the startup will be called …

Ladies and Gentlemen, the final name of my 30-days startup challenge is :

I already reserved a domain name to put the website.

As my creative skills are really poor, I am looking for someone to create a logo that would correspond to the startup. If you are a designer and want to help me, just leave me a message and let’s start interacting !

I also realized while writing my article that my English has become terrible, so if some native speaker could have the time to proofread my blogposts, that would be very nice